An analysis of why The Damned’s 1985 classic could have easily made the perfect James Bond theme.

James Bond themes are extremely distinctive and easy to recognise. But what elements do they contain exactly which stand out so distinctively, even in songs which were not written for Bond movies? The Damned’s “Street of Dreams” which was released on their 1985 Goth classic Phantasmagoria has almost all the elements of a perfect Bond theme – read on to find out these similarities and how Dave Vanian’s clever song-writing has led to an uncanny comparison – yet one which still maintains distinctiveness on both sides.

The typical Bond theme has a moody, film-noir style atmosphere – one which perfectly sums up the cold-blooded agent with his license to kill. With such easily recognisable music, the films have remained an integral part of British culture since their inception, and this is partly due to these qualities.

Bond singers also tend to have stand out voices – whether Chris Cornell in the 2000s with “You Know My Name”, or Shirley Bassey belting out “Diamonds Are Forever” back in the heyday of Bond. The instruments chosen evoke the sounds favoured during the golden era of espionage: Jazz, Blues, Torch songs, ballads, and a flair for the dramatic. However, it is the later themes from Cornell onwards that really share similarities with “Street of Dreams” – partly as Bond song-writing changed to favour imagery and more theatrical production, composition, and arrangement.

Each Bond theme is generally written specifically for the film. However, whether intentionally or unintentionally, some songs follow the pattern of a Bond theme without having actually been written for a Bond movie – or intended as such in any way whatsoever. And this pattern, in its own way, could be considered quite dark and gothic. One designed to evoke the closed drawing rooms of MI6 and the old, established practices of espionage where nobody knows what may be around the corner.

With these gothic elements, “Street of Dreams” aligns well with the more modern Bond themes – but what exactly are they and how are they used by both Vanian and the long line of Bond composers? The Damned’s introspective lyrics remind the listener of the moody, psychological aspects of Bond movies and their songs, especially later songs from the Daniel Craig era. Vanian’s gothic demeanour is tangible through his singing and perfectly fits in with this, evident in rich vocals which range from high to low, bringing a dramatic narrative to the separate vignettes which make up the lyrics.

“Street of Dreams” confronts themes of loneliness and emotional disorientation which become indistinguishable through metaphor with the physical, turning them into a complex narrative – and as the later Bond themes have tended towards incorporating elements of loneliness and lost or doomed love, “Street of Dreams” fits right in with songs such as “Skyfall” or Sam Smith’s “The Writing on the Wall”.

Almost all Bond themes contain sombre yet complex tones created by jazzy sounds and instruments such as violins and brass. These evoke music from the golden era of espionage, through genres like jazz, blues and theatre, which create an atmosphere of tension and release or alternating order and chaos. Like Vanian’s wide range, Bond chord progressions also rise and fall with notes clashing at one moment and falling into harmony during the next. In fact, this is one of the most significant aspects, making Bond sound like Bond – and “Street of Dreams” uses it in abundance.

Bond themes also have a driving pulse, famous in the main signature theme by Monty Norman but also evident in Jack White’s “Another Way to Die” and in “You Know My Name”. And “Street of Dreams” succeeds at this very well. In fact, the fast, powerful drums which kick in after the descending tones at the beginning of the theme, drive it forward like the classic car chase scene in almost every Bond movie. In combination with the well-chosen synths, dramatic lyrics, and big vocals which sustain the air of suspense, “Street of Dreams” could easily end a Bond movie as credits roll.

“Street of Dreams” is narrative and story-driven, embodied similarly in “You Know My Name”, as Chris Cornell sings about himself as a cold-blooded agent who cuts down enemies with merciless pragmatism. In “Street of Dreams”, the narrator simultaneously embraces a similar sense of mystery and danger, describing how he doesn’t know what to feel, evoking even the sense of being a mystery to himself – though in contrast to Bond, The Damned remove the explicit darkness, threats of death, and espionage to instead create a feeling of uneasiness through the unknown.

Their tense, atmospheric music includes synthesised versions of instruments favoured by Bond songwriters and producers over the years but especially in the modern era, such as violins. With the two combined, more is left up to the reader’s imagination – but this way is part of the appeal of goth. The mysteriousness and dramaticism that leads people into the subculture allows them to make up whatever fears and horrors best suited their fancy. In this way, “Street of Dreams” only hints at something deeper which lies under the surface. And although “You Know My Name” is more explicit, other Bond themes such as “Skyfall” hint at what is to come in the film, increasing the similarities with “Street of Dreams” in suggesting something else lies occluded.

At its heart, there is one thing both the later Bond themes and “Street of Dreams” do especially well, and that is imagery and metaphor. This process takes the raw language and propels it to something deeper, allowing imagery, associations, and the labyrinthine history of any listener’s relationship with music to resonate deep inside at a level more complex than if language were used alone.

As Billie Eilish sings in “No Time to Die” ­­­– “the blood you bleed is just the blood you owe” – metaphor feeds into words that feed into music like a cycle, creating atmosphere. And whilst “Street of Dreams” and these later Bond songs have come from very different places, they nonetheless reach somewhere similar – both in terms of the emotional response they evoke, and the way both have created for themselves a niche within the surrounding culture. 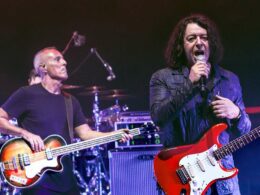 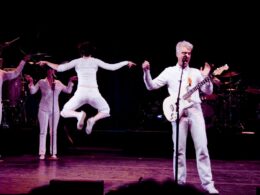 How David Byrne turned a natural social awkwardness into something that connected with people.
byP. Sydney